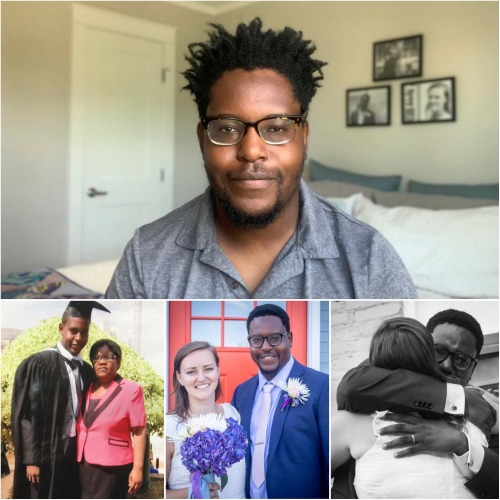 “My mother passed away suddenly while I was studying in America. It was such a dark moment for me. She had been the most important person in my life, and I wasn’t even with her when she died. I needed to get home to Zimbabwe for the funeral, but it was right before Christmas so every flight was booked. The only ticket I could afford was a middle seat. It was so cramped. I couldn’t even move my legs. But I happened to notice an empty seat in the exit row behind me. The flight attendant allowed me to change places, and I sat down next to a white girl. I remember thinking: ‘She’s going to hate me for taking up her space.’ But instead she smiled and made a joke. She said: ‘Welcome to exit row paradise.’ There was an immediate connection. Right away we began talking about deep things. I told her about my mother. And she told me that her father had also died suddenly while she was working overseas. We started sharing stories of our parents. And before we landed, she ordered two whiskey drinks in celebration of my mom. I spent two weeks in Zimbabwe. I told all my friends that my mother had put an angel on my flight. My trip home wasn’t much easier. This time I had a long layover in London, so I sat down in the airport bar and ordered a beer. And in she walked. God had put us on the same flight once again. When we pulled out our tickets and looked at our seat numbers, we couldn’t believe it. She was seat 61. I was 60. I hadn’t even been looking to meet someone. I was determined to stay single and focus on my schoolwork. But it was like she had been brought to me. Everyone who meets Hannah tells me how lucky I am. She is so kind, and smart, and accomplished. We dated for almost two years before we got married. When I gave a speech at our reception, I didn’t need notes. Because I knew our story. I told everyone about that girl I met on a plane. And I was looking at her as I spoke, and she was now my wife, and it made me so emotional. It was so hard to know how to feel. I wanted my mom to meet her so bad. But if my mom was still here, I’d never have met her. Somehow I’d found the most important person in my life because I lost the most important person in my life.”

The prime minister of Australia has called for an investigation into the assault of an Australian cameraman that aired live on a national television news show on Tuesday morning, Australia time. That's Monday evening in Washington, DC, where the attack occurred.

Amelia Brace, a reporter for Australia's Channel 7, and her cameraman, Tim Myers, were covering a protest near the White House in Washington, DC. It was around 6:30pm—half an hour before a 7pm curfew was scheduled to start.

"We've just had to run about a block as police moved in," Brace said as she stood amid protesters outside the White House. "We've been fired at with rubber bullets. My cameraman has been hit."

"Here they come moving through again," she said as the police line started to move, with protesters sprinting to stay out of the cops' way.

Brace and Myers themselves apparently didn't move quickly enough for the police. As the line approached, the looming figure of a masked policeman filled the frame. Then the cop's fist came directly at the camera and it fell to the ground with a thud.

The audio feed was silent for a few seconds. "Amelia can you hear us?" one of the news anchors asked from Australia.

Finally Brace reappeared onscreen. "You heard us yelling there that we were media, but they don't care. They're being indiscriminate at the moment."

"You really saw the way that they dealt with my cameraman, Tim. They're quite violent, and they do not care who they are targeting at the moment."

Attacks on reporters have become common

The incident caught the attention of Australian Prime Minister Scott Morrison, who called for an investigation into the way Brace and Myers were treated by US police.

Australia's foreign minister said that Morrison had "contacted the Australian Embassy in Washington DC on Tuesday instructing them to investigate the troubling incident and provide further advice on registering the Australian government's concern."

Arthur Culvahouse, the US ambassador to Australia, expressed concern about the incident on Tuesday.

"Freedom of the press is a right Australians and Americans hold dear," he said. "We take mistreatment of journalists seriously, as do all who take democracy seriously. We remain steadfast in our commitment to protecting journalists."

American cops' harsh treatment of journalists has not been limited to foreigners, nor has it been limited to Washington, DC. A few days ago, police in Minnesota arrested CNN reporters as they reported live on protests in the state. Like Brace and Myers, they seemed to be doing their best to comply with the orders of law enforcement prior to their arrest.

How to Cop-Proof Your Phone Before Heading to a Protest by Sam Rutherford on Gizmodo, shared by Riley MacLeod to Kotaku
Tuesday June 2nd, 2020 at 9:13 PM

At some point, everyone reaches a limit where they can no longer sit back and stay silent about injustice in the world. However, if you do plan on attending a protest—even a peaceful one—there are some important precautions you should take with your phone before you go.

To White Organizational Leaders, Silence is Violence: Here’s What You Should Do Now

Ways Companies Can Act (a thread)

75 Things White People Can Do for Racial Justice

How to Support the Struggle Against Police Brutality 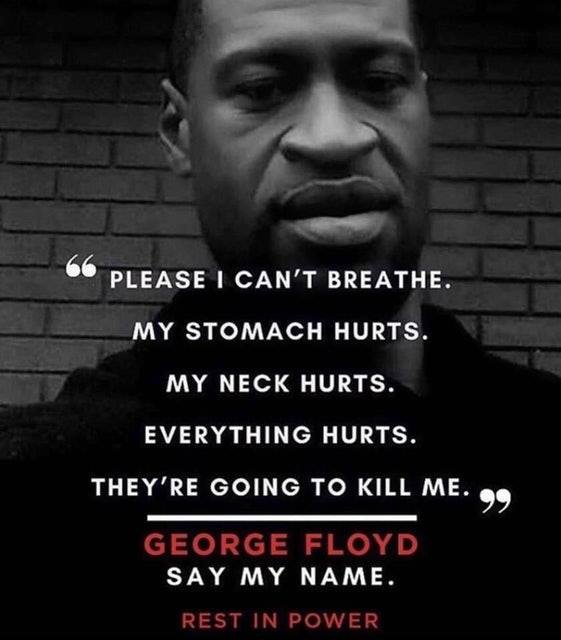 was originally published by Alison Green on Ask a Manager.

Brooklyn Nine-Nine star Stephanie Beatriz has donated a chunk of her salary to bail funds for those involved in Black Lives Matter protests across America.

Bisexual actor Beatriz plays the character of detective Rosa Diaz, who is also bisexual, in the long-running comedy about a police force in New York.

The light-hearted show generally portrays police officers in a positive light, allowing viewers to sympathise with cops – but Beatriz understands that the reality is often very different. In recognition of this fact, the star has pledged $11,000 of her earnings towards charities supporting the Black Lives Matter movement.

“I’m an actor who plays a detective on TV,” she tweeted. “If you currently play a cop? If you make tens or hundreds of thousands of dollars a year in residuals from playing a cop? I’ll let you do the math.”

I’m an actor who plays a detective on tv.

If you currently play a cop?

If you make tens or hundreds of thousands of dollars a year in residuals from playing a cop?

I’ll let you do the math. (Thanks @GriffLightning for leading the way). pic.twitter.com/Xxf3dU0urF

The attached receipt shows $10,000 of her donation went towards the #FreeThemAll emergency response fund organised by the Community Justice Exchange, a non-profit working to end mass incarceration.

The Brooklyn Nine-Nine actor also included a $1,000 tip to ActBlue to support organisations fighting against racism and police brutality.

She was encouraged to do so after a fellow actor, Griffin Newman, donated to the emergency response fund in light of his role playing a detective on two episodes of Blue Bloods several years ago.

“Thank you for tagging me. Donating now,” Beatriz immediately replied. She’s since been inundated with praise from fans, who thanked her for using her platform in the right way.

Stephanie, you have no idea of how grateful I am that you’re using your platform the way you are. That you’re not sugarcoating police brutality with cute propaganda videos. That you recognize the responsibility you have playing a cop on TV. Thank you, from the bottom of my heart!

i was literally thinking about how nine nine was gonna have a worse taste in my mouth if i tried to watch it again after all of this and then i see this, so, you know. thanks

The post Brooklyn Nine-Nine star Stephanie Beatriz donates thousands to Black Lives Matter in recognition of her role as a TV cop appeared first on PinkNews - Gay news, reviews and comment from the world's most read lesbian, gay, bisexual, and trans news service.

L’Oréal is facing heavy criticism for sharing a Black Lives Matter solidarity message about the value of “speaking out” given it abruptly dropped model Munroe Bergdorf for speaking out about white supremacy in 2017.

As global attention focuses on the protests against racism and police brutality in the US, after the police murders of Black men George Floyd and Tony McDade, L’Oréal apparently deemed it the right time to weigh in.

The brand seems to have hoped that its Black Lives Matter message wouldn’t jog anyone’s memory, tweeting an image on the first day of LGBT+ Pride Month (June 1) that says: “Speaking out is worth it.”

L’Oréal Paris stands in solidarity with the Black community, and against injustice of any kind. We are making a commitment to the @NAACP to support progress in the fight for justice. #BlackLivesMatter pic.twitter.com/4VDZUAdgXv

But while L’Oréal may have hoped that its treatment of Bergdorf had been forgotten, the internet swiftly proved it wrong.

Remember when y’all fired Munroe for speaking on race issues

We did not forget what your did to Munroe

You threw a Black trans woman under the bus for speaking out against white supremacy. Nobody has forgotten what you did to Munroe Bergdorf.

you created a massive public pile on of abuse on Munroe Bergdorf specifically because she spoke out about racism and white supremacy. you allowed a Black trans woman to be publicly pilloried FOR YEARS, just to protect white supremacy from critique. HOW DARE YOU

L’Oréal dropped Munroe Bergdorf for speaking out about white supremacy.

She was almost immediately subjected to a Daily Mail hatchet job for comments she had made in the aftermath of white supremacist and neo-Nazi rallies that took place in Charleston, US, in the first weeks of that month.

The ire of the right-wing press focused on a post Bergdorf had shared on Facebook, which read, in part: “Honestly I don’t have energy to talk about the racial violence of white people any more.

L’Oréal decided to abruptly drop her – just days after announcing their partnership – stating that her comments were “at odds with” its values. The media then hounded Bergdorf for being a “racist”.

Bergdorf said that L’Oréal’s Black Lives Matter message had “brought up a lot of trauma from having to deal with L’Oréal Paris‘s racism the first time around”.

She tweeted: “Where was my support when I spoke out?

“Excuse my language but I am SO angry. F**K YOU L’Oréal Paris.”

The hypocrisy in these insipid corporate tweets in support of the Black community is just beyond belief.

If you haven’t walked it, don’t fucking talk it. https://t.co/qv1oSETB1P

Bergdorf continued: “You dropped me from a campaign in 2017 and threw me to the wolves for speaking out about racism and white supremacy.

“With no duty of care, without a second thought.

“I had to fend for myself being torn apart by the world’s press because YOU didn’t want to talk about racism.

“You do NOT get to do this. This is NOT OK, not even in the slightest.

“I said yesterday that it would only be a matter of time before RACIST AF brands saw a window of PR opportunity. F**k you. F**k your ‘solidarity’.

“Where was my support when I spoke out? I’m disgusted and writing this in floods of tears.”

If you care about me or #blacklivesmatter, don’t let @lorealparis get away with this.