Nintendo’s new Game & Watch re-release is of course built on new hardware, not stuff from the 80s, and so folks have been able to do some interesting things with the handheld’s code. Like, first things first, getting Doom up and running.

angelchrys
reply
I love that the two default questions of nerds when presented with new hardware are: can I run Windows 95 on it? Can I run Doom on it?
Overland Park, KS

During an interview with Central Ave on Friday (November 21), Wade thanked the boxer for speaking up about his and Gabrielle Union’s trans daughter, 13-year-old Zaya, last month.

This year, Badazz became almost fixated with Zaya and the loving way she is being raised by her parents. He has reportedly made disturbing remarks about her, beginning in February when he said: “Don’t cut [her] f**king d**k off, Dwyane Wade.”

“I actually talked to Mike about that early in the pandemic,” the former pro basketball player said.

“He’s so smart. He is so educated and knowledgeable about life,” the 38-year-old added. “For him to be able to drop that nugget on the world, to me, it was great to hear him say that.”

Wade acknowledged that everyone, including Badazz, has “their own journey towards accepting things.”

‘I’ve never came out and said anything to anybody that feels a certain way about me or someone else in my family and my loved ones,” he said.

During Badazz’s appearance on Tyson’s show, Hotboxin’ With Mike Tyson, the eponymous host asked why the musician is attacking Zaya in the way he is.

“Why do you say things about people who might be homosexual?” Tyson asked, clearly misunderstanding that being trans is not the same thing as being gay.

“Why do you say that about them? Do you feel there’s a possibility that you’re a homosexual and by disrespecting them you further yourself from being a homosexual?”

Badazz responded: “No, I’m straight as an arrow.”

“If you’re straight, then why do you offend people?” Tyson replied.

Badazz said: “I really commented on Dwyane Wade’s situation because I got offended because it’s a child.

“That’s why I really got offended, you know. If it was a motherf**king 19-year-old, 18-year-old, grown person, I probably wouldn’t have, I know I wouldn’t have said anything.”

The couple has been vocal in their support for their trans daughter, praising her as “wildly inspiring” in September when they were named as one of TIME magazine’s 100 most influential people of 2020.

In a video released at the time, the couple said Zaya “has the freedom to be exactly who she is, who she was born to be, to be her most authentic self”.

“She doesn’t ask permission to exist. That is wildly inspiring.”

Business giant IBM finally apologises for firing a computer pioneer 52 years ago just because she was trans by Emma Powys Maurice
Friday November 20th, 2020 at 4:47 PM

It’s taken 52 years, but IBM has finally issued a full apology for firing the pioneering computer scientist Lynn Conway because she was transgender.

In 1964 Lynn Conway joined IBM Research, where she made major innovations in Very Large Scale Integrated (VLSI) chip systems. She is credited with several key discoveries that would go on to power smartphones, the internet, and national defence.

Despite her many foundational contributions to computer architecture, she lost it all in 1968 when IBM’s medical director outed her to the CEO, who fired her on the spot.

Conway struggled to support her family as a result, and the situation worsened when California’s Social Services threatened a restraining order if she attempted to see her children post-divorce.

But it wasn’t the end. Conway overcame the adversity IBM threw at her and worked as a computer architect at Memorex Corporation before moving to Xerox Palo Alto Research Centre. In the 70s and 80s she pioneered new VLSI technology that now underpins current microprocessor chip design.

Later in 1985, the University of Michigan hired her as a professor of computer science and electrical engineering and associate dean of its engineering school. She eventually retired in 1998 with the honorary title of professor emerita.

Now an 82-year-old trans activist, Conway has finally got the vindication she deserves after IBM apologised for its actions, having avoided the issue for decades.

“We deeply regret the hardship Lynn encountered,” the business giant told Forbes, admitting full responsibility for Conway’s firing all those years ago.

IMB agreed a formal resolution with Conway, and in early October the company emailed its employees an invitation to attend a virtual event titled “Tech Trailblazer and Transgender Pioneer Lynn Conway in conversation with Diane Gherson”, IBM’s senior vice president of human resources.

The event began with a heartfelt apology for Conway’s mistreatment, in front of 1,200 people.

“Diane delivered the apology with such grace, sincerity, and humility. Lynn was visibly moved,” said Anna Nguyen, a software engineer who attended the session. “I struggled to hold back tears.”

Conway was also awarded the rare IBM Lifetime Achievement Award, given to individuals who have changed the world through technology inventions.

But it pales in comparison to the long-awaited apology, which finally gave Conway closure to an event that shaped her life.

The post Business giant IBM finally apologises for firing a computer pioneer 52 years ago just because she was trans appeared first on PinkNews - Gay news, reviews and comment from the world's most read lesbian, gay, bisexual, and trans news service.

T-Mobile has added support for the 988 emergency mental health services number more than a year and a half ahead of the Federal Communications Commission’s deadline, the company announced on Friday. T-Mobile customers who dial 988 will be connected to the National Suicide Prevention Lifeline (NSPL) and its network of crisis centers across the US. T-Mobile says it is the first carrier in the US to make 988 available to its customers.

T-Mobile chief technology officer Abdul Saad said in a statement that making the shorter emergency number available to customers was “a matter of urgency for us, particularly as the COVID-19 pandemic continues and the holiday season approaches.”

In 2019, the FCC released a report suggesting a three-digit hotline number would make it easier for those seeking help. The FCC voted unanimously in July to make 988 the number to connect to the NSPL hotline, and it gave carriers until July 2022 to put it into effect. However, the 988 number isn’t able to receive text messages, which FCC commissioner Jessica Rosenworcel said at the time was problematic. She noted that voice service is “not native for most young people.”

CDC says people should not travel for Thanksgiving due to COVID-19 surges by Nicole Wetsman
Thursday November 19th, 2020 at 2:43 PM

The Verge - All Posts
2 Shares

Officials at the Centers for Disease Control and Prevention said that people should not travel for Thanksgiving, citing the rapid increases in COVID-19 cases and hospitalizations around the country. “It’s a strong recommendation,” said Henry Walke, COVID-19 incident manager at the CDC, during a press briefing.

The United States is averaging over 160,000 COVID-19 cases per day, and the coronavirus is spreading out of control in most states. “We all need to consider the safest way to celebrate this holiday amidst this critical phase of the COVID-19 pandemic,” Walke said.

The US saw spikes in cases after the Memorial Day and Labor Day holidays, and Thanksgiving poses an even larger concern: celebrations usually happen indoors (where the virus spreads more easily), with multiple generations (including older adults at high risk of severe COVID-19). There’s also more virus spreading in most places in the US now than there was during those summer holidays.

The agency released updated guidelines for the holiday on Thursday, which say that staying home is the best way to stay safe. People thinking about traveling should consider if anyone in their household is at risk for a severe case of COVID-19 due to an underlying condition, if hospitals in their area are overwhelmed, and if they’re able to stay away from others in the two weeks before they might travel, among other questions. “If the answer to any of these questions is “yes,” you should consider making other plans, such as hosting a virtual gathering or delaying your travel,” the guidelines read.

The process of getting from one place to another also concerns the CDC. “What we’re concerned about is not only the actual code of travel — whether it’s an airplane, or a bus, or a car, or an RV, for example — but also the transportation hubs,” Walke says. “When people are in lines and waiting to get on the bus or get on a plane, people tend to crowd together.”

Gathering with people who don’t live in your household for Thanksgiving is also risky, the CDC says. You can make it safer by eating outdoors and sticking to a small number of guests. People celebrating indoors can keep windows open and wear masks. The CDC also offers advice for shopping around the holiday. The guidelines encourage people to shop online, use contactless pickup, and maintain their distance from others at outdoor markets.

Anyone who isn’t living with you in the 14 days before Thanksgiving is considered outside of your household, Erin Sauber-Schatz, lead for the CDC’s Community Intervention and Critical Population Task Force, stressed on the press call. That includes college students who may call your household home but don’t live there during the school year. “You definitely need to take extra precautions within your house,” she says. That might include wearing a mask inside the house or keeping windows open.

The health and safety of your family members and of other people they may interact with is at stake, Walke says. “The tragedy that could happen is that one of your family members, from coming together at this family gathering, actually could end up being hospitalized and severely ill and die,” he says. “People want to see their relatives and their friends, the way they’ve always done it. But this year, particularly, we’re asking people to be as safe as possible and limit their travel.”

How have we not noticed this?

And the animation is adorable, too...

With all the tricks, glitches and discoveries spotted in Zelda: Breath of the Wild over the past few years, it's reached a point where seeing new things doesn't surprise us any more. This thing will keep on giving more for years and years to come, and we love it.

Read the full article on nintendolife.com 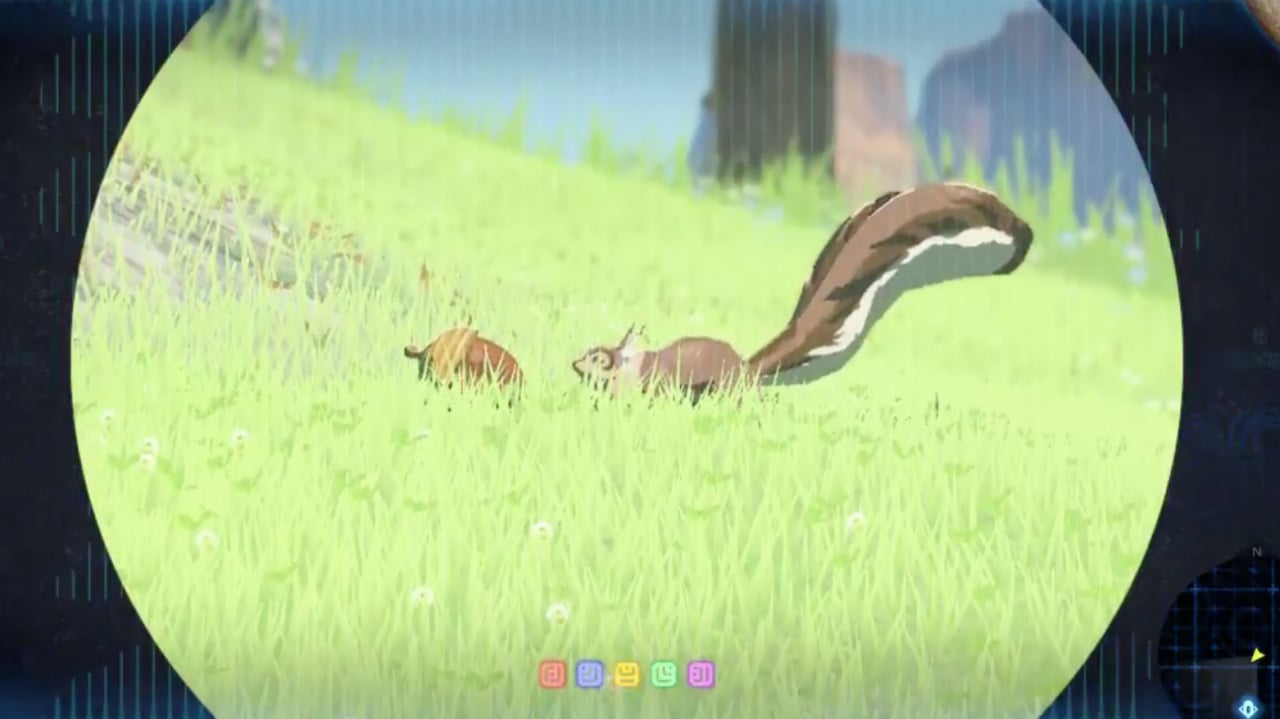